In the Maelstrom of History: A Conversation with Miriam by Rosanna Turcinovich Giuricin (2022) is the story of Miriam Frankel (nee Grünglas), an elderly Jewish woman who, as a young teenager, suffered through the Holocaust and lost her entire family in Auschwitz, but managed to survive and eventually emigrate to Canada, where she is now a happy grandmother and matriarch of a large family. In her old age, Miriam spoke (until a few years ago; she is now 95 years old) about the Holocaust to students in schools here in Ontario by telling them what she herself went through in her early teens. I heard her tell her story when she spoke about ten ago at the University of Toronto for the International Day of Remembrance of the Holocaust and she impressed me to no end. I did a short article on her for my Italian club’s newsletter and then introduced Miriam to my friend Rosanna Turcinovich Giuricin, an international and prize-winning journalist based in Trieste (Italy); the book is the result of that introduction.

The book is based on a series of interviews Rosanna Giuricin conducted with Miriam Frankel over the course of several years and extensive archival research in the archives of Trieste, the city where Miriam grew up and where her father was the cantor at the local synagogue. For an article in English on the Italian version of the book (which in Italian was titled “Maddalena ha gli occhi viola”) seehttps://www.degruyter.com/document/doi/10.3138/9781487519285-013/html

What distinguishes this book is that it is structured as a conversation/meditation between two women: Miriam, the Holocaust survivor, and Rosanna Giuricin, whose family survived the ethnic cleansing of Italians from Istria in the mid-to-late 1940s. The other distinguishing aspect of this book is that it is a story about Jews in Trieste, a prosperous city with a significant and international Jewish population, but about whom very little is available in English. At the end of the book, there is a short essay on the Jewish population of Trieste by the historian Silvia Bon, past president of the Regional Institute for Hebrew Culture in Trieste and Friuli Venezia Giulia. 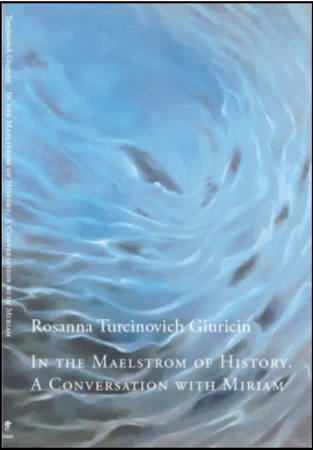